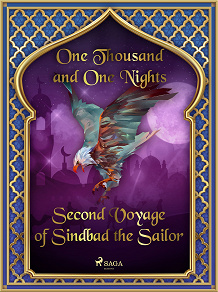 Second Voyage of Sindbad the Sailor

by One Thousand and One Nights
After such lucky escapes from disaster as those in Sindbad’s first voyage, most people would probably choose to stay at home – but Sindbad is not most people. Going to sea a second time, Sindbad must contend with giant eagles and snakes to carry home treasure from the valley of diamonds in this, the seventeenth of 34 tales in the classic Arabian Nights collection translated by Andrew Lang.