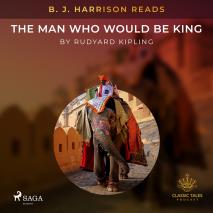 B. J. Harrison Reads The Man Who Would Be King

by Rudyard Kipling
Daniel Dravot and Peachey Carnehan are two scruffy adventurers who are planning to conquer Kafiristan – a remote part of Afghanistan. The two men pretend to have signed a contract that neither of them will touch alcohol or women. However, disguised as a priest and his assistant, Dravot and Carnehan depart for Kafiristan, secretly carrying twenty riffles. Why do they want to conquer Kafiristan? Will the make it across the border alive? Find all the answers in Rudyard Kipling’s adventure story "The Man Who Would Be King" from 1888.