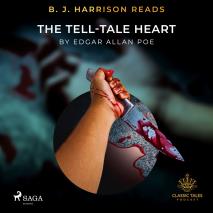 by Edgar Allan Poe
B.J. Harrison tells Edgar Allan Poe's story 'The Tell-Tale Heart', where our narrator has committed the crime of murdering an older man. He does not consider himself a madman, and he describes the murder up to the smallest detail. Yet he has killed a man whom he loved and had never wronged him, for the sake of the mans' 'evil eye'. The novella from the 19th century is one of Edgar Allan Poe's best-known short stories and has been transformed into theatre, film and television adaptations alike. One of the most recent ones is the film The Tell-Tale Heart from 2016, starring Rose McGowan.

Edgar Allan Poe (1809-1849) was an American writer, poet, editor and literary critic. He is considered a pioneer in the genres of detective fiction, the macabre and science fiction. His numerous short stories include the likes of 'The Purloined Letter', and 'The Raven' is one of his best-known poems. Edgar Allan Poe's works have been captured throughout popular culture, including films, such as Histoires extraordinaires from 1968, based on Poe's stories and directed by Federico Fellini.