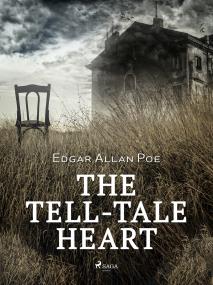 by Edgar Allan Poe
Poe’s preference for not naming his narrators is potent once again in “The Tell-Tale Heart”, a story that is trying so hard to appear sane, but fails miserably in the end. With minute preparations, perfect calculations, and even more precise execution of the conceived gruesome act, the narrator successfully fulfils his purpose, only to be lost in a battle with his sanity and guilt afterwards. Backed by the numerous movie and theatrical adaptations, the story is considered one of Poe’s most popular and critically acclaimed.

Edgar Allan Poe (1809-1849) was an American poet, author, and literary critic. Most famous for his poetry, short stories, and tales of the supernatural, mysterious, and macabre, he is also regarded as the inventor of the detective genre and a contributor to the emergence of science fiction, dark romanticism, and weird fiction. His most famous works include “The Raven” (1945), "The Black Cat” (1943), and “The Gold-Bug” (1843).